Our little local convention, ShepparCon, entered its second year this year and it turned out to be a fantastic weekend of great games and more importantly, great people. I think I spent more time wandering around and chatting than I did actually sitting down to play, but I had a blast, the people make these events!

It was also the first year my son came with me for an extended time, and I very much enjoyed the opportunity to include him, we played a number of great games together and he was very excited to attend. A huge thanks to all those who gamed with us, my son and I had a great time, having the chance to play Hisss and Colt Express were his favourite experiences of the con (we may now have both in our collection).

So what were the standout experiences?

I played my first game of Colt Express, the 2015 winner of the prestigious Spiel des Jahres award. I must say that I enjoyed my first game immensely, we played this game twice over the course of the weekend, bought a copy, and have played twice since. The game is all about outlaws trying to grab as much loot as they can during a train heist, while slipping away from one another, beating up one another, and avoiding the Marshall. It's a lot of fun, and the way the movement of all the players is programmed is a very clever and interesting mechanism I enjoy a lot. 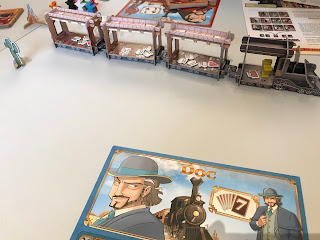 Every turn players will have the chance to play a number of action cards from their hand, these cards are played into a single collective pile, sometimes face up (allowing you to see what everyone is doing), and sometimes, if the train is going through a dark tunnel, face down (meaning no-one knows what each other is doing). After the players have played their 4-5 cards each into this deck (usually one at a time), the deck is flipped over and the actions enacted. The actions allow you to move up onto the roof, left and right, collect loot, punch or shoot the other players and move the Marshall. The way some of the cards are face up, and some face down means that you can plan and program your own actions, but there are times when the actions of others will be a mystery. You may have started in a carriage with an outlaw you had planned to punch, but by the time your card is revealed, they may have already slipped away to the roof. 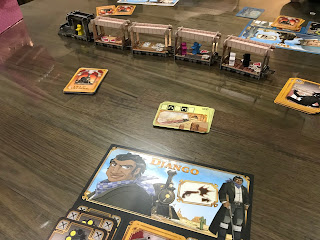 There is a good level of thought to be found in Colt Express, and whole lot of fun. Once the deck has been constructed it is always amusing to see what unfolds. Outlaws shooting thin air, swinging punches in an empty carriage, trying to collect loot from a carriage already emptied by a sneaky other outlaw. Your choices make a difference, but there is also a dose of second-guessing your opponents and luck involved. These things don't detract from the game, but enhance the experience in my view, and the whole is, simply put, a lot of fun.

My other favourite game from the convention was Flamme Rouge, and I say this as a person who finds cycling about as interesting as performing surgery on myself with blunt kitchen items. If someone said, 'We're spending tonight watching cycling', I'd cast about for the nearest black hole to spaghettify myself in. If someone said, 'We're spending tonight playing Flamme Rouge." I'd be thrilled. It really is an excellent game. We played with the basic rules, the advanced rules, as I understand it, add some variety to the track, making for some added complexity in the planning and execution of the race, but aren't a huge step up. 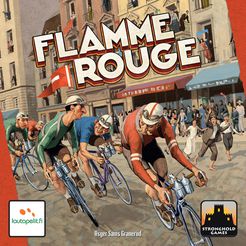 In Flamme Rouge each player has two cyclists, the rouleur, who is the steady pace setter, and the sprinteur, who is generally slow, but capable of great bursts of speed. Each turn players will select a card to play from their hand for each of their cyclists, the card will dictate how many spaces forward the cyclist will move. Those at the head of a peloton will earn exhaustion cards, which dilute their deck (and therefore hand), those a space behind another cyclist will slipstream forward. 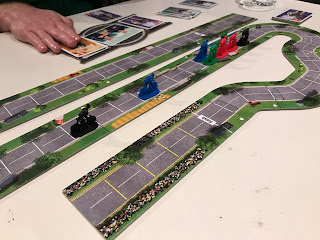 Simple rules, simple game, but it all comes together on the track. The game is all about second guessing what the other players will do, how to position your grinding rouleur with your short burst sprinteur, and positioning the sprinteur so they can make the final dash forward that will win you the race. The card play and movement system is really straightforward, but the game comes together as all elegance of clean design. It works, and it works really well. I even walked away with an increased interest in cycling, ye gads! 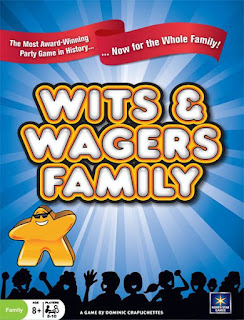 We had somewhere around 35 people playing in six teams, and all the questions were game related, things like: How many Elektros would you have if you had all the notes in a game of Powergrid? In what year was famed game designer and unicorn hunter Bruno Faidutti born? and so on. 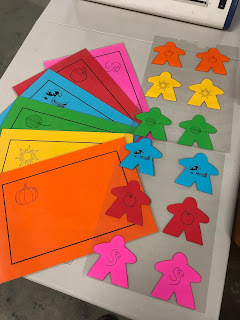 These events, for me, are more about community building, the friendships and laughter, than the game itself, but Wits and Wagers is a great game that perfectly suits such an evening. I'm not sure about everyone else, but as the person trying to make jokes and ask the questions, I had an absolute blast. I'm hoping that everyone else who came along had as much fun as I did! 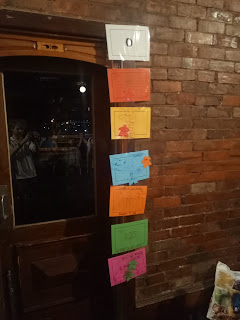 Next year we'll do our best to run this event again, with a new set of questions and some little tweaks to the rules. I also need to make sure my set of meeples for each team is easily visible (they had a tendency to blend in a little too well), and that I use velcro or something to attach them better (Blu-tack was merely ok). We were lucky enough to have prizes for all of the winners (thanks to the generosity of Grail Games), and hopefully we can provide similar going forward.

As a part of ShepparCon we also had a protospiel event organised by Karl Lange of Ark Angel Games. During this I had the chance to play two prototypes, one by game designers and all around great people Ben and Shae Boersma of Darwin Games, which was a lot of fun. It was a mix of die rolling, power activation, deduction and memory (time didn't permit us to play a second game, which I would have liked). The other was from Karl Lange, and was a roll and write game with a pirate theme, a game which I thoroughly enjoyed, ARRRR!!

Gaming with my Family

The best thing about this year was that my son was able to attend for a large portion of it. Being 8 he can't join in with all games, but I really appreciate those gamers at the event that were more than happy to include him in our games together. He had a great time, with Colt Express his clear favourite of the con. I also had my wife and daughters come in throughout the weekend, and the chance to play the Disney version of Codenames was a lot of fun. 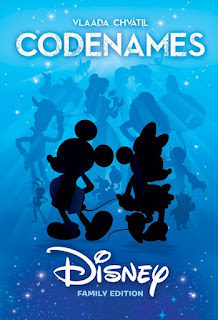 He also had a great time playing Magic Maze, and with 7 or 8 players (I can't recall exactly), it was raucous and just plain hilarious. The fact you couldn't talk during while the game was 'active' was something he absolutely loved, though I could tell he was burning to talk throughout. 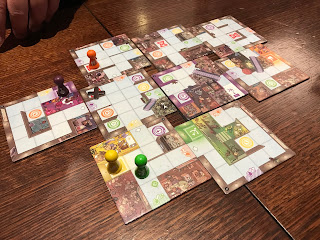 The red pawn piece used to alert other players that they had something they needed to do in the game put in some hefty overtime in this game!

One of the things I love most about this style of convention is that everyone is there to play some games and have some fun. I had the chance to walk around and speak to a lot of people, as well as play games with people I haven't gamed with before. Everywhere I looked people were inclusive and friendly, and that is exactly the sort of atmosphere I love most. It was also wonderful to catch up with friends I hadn't seen, in some cases, for many years.

Board gaming is a social hobby, with the opportunity to stretch our minds, but also the chance to talk and laugh with people that share our interests. Overall it was a great con experience for me, and I hope for all those who attended. It certainly energised our little local gaming group! As part of the organising committee we were extremely pleased with how it turned out, and are very much looking forward to 2019!