I seem to have been on a theme recently, the last five posts from the Castle have all been about Gaslands. This is to make it six in a row...

The last little while I have been consumed by both getting some freelance work finished and completing my school reports, outside of that I managed to squirrel away a little time to finish off a set of four gates for my Gaslands table (I want to make some billboards next, and I think I'll be done). These gates are from an Australian company called Module-R Terrain, they went together very easily, and look great; you get six in a set (I have the last two near finished, but needed four done for an upcoming event). Well worth the price of admission! 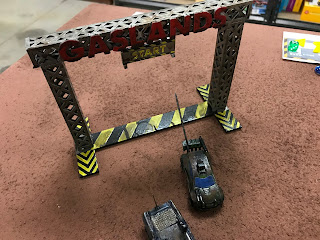 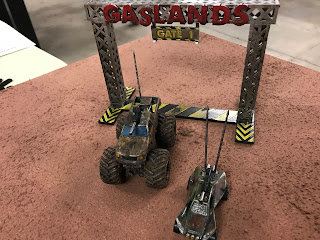 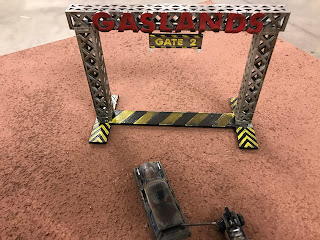 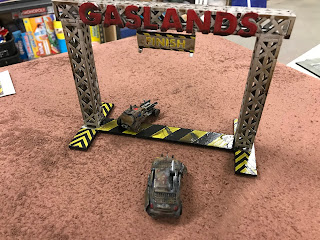 With all of these I undercoated them with a silver metallic spray. After this I heavily dry-brushed with a lighter silver paint. The next step was to paint the black and yellow stripes. I used a piece of ragged foam to stipple on the red for the signs. Once all that was done I washed it heavily with a black wash (Dark Tone from Army Painter). Lastly, I dribbled a fair bit of brown wash over them to give them a rusted look. The tire marks and oil stains on some of the gates were made with pooled black wash - the Army Painter stuff from the tin is quite viscous, I watered it down when painting the gates, but used it straight for the tire marks etc.

So, four gates finished! All ready for an upcoming participation game I'll be running at the local game convention ShepparCon, which I am greatly looking forward to. I was also blown away that Sebastian of Module-R Terrain offered to support the event, and I'll have some packs to hand out for 'spectacular happenings' and 'ludicrous carnage' over the course of the weekend!

I also managed to finish off the cars I had on the workbench. One was a buggy, the other a monster truck... 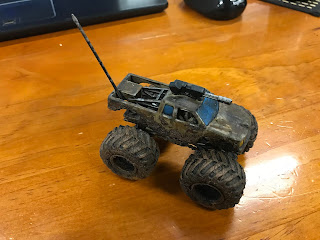 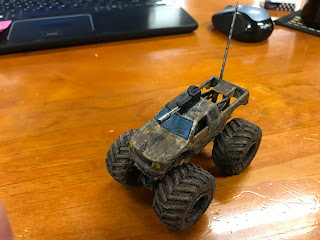 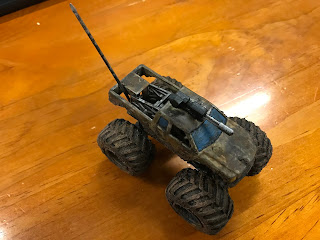 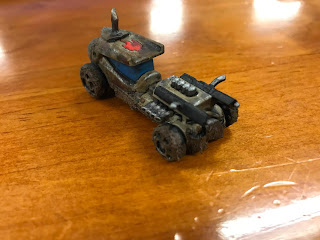 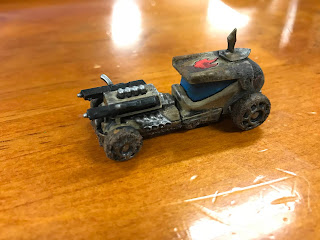 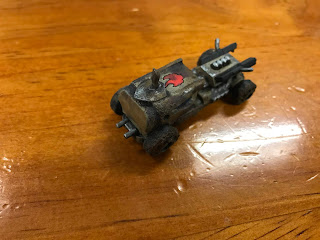 With both of these I used plenty of Vallejo textured paint to make them look like they have a fair amount of mud caked to them. Other than that, I followed the same method as for the other cars I have completed: an undercoat of Indian red, water and salt in patches, an undercoat of the base colour, get rid of salt, detailing, wash, highlight, rust effect and finally varnish. I am fairly happy with how they've come out. Now I need to do a couple more cars for the participation game coming up, and I'll be fairly well done I think... 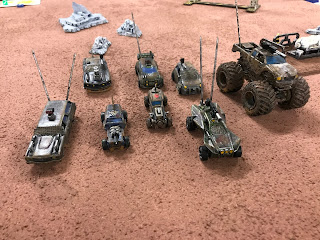 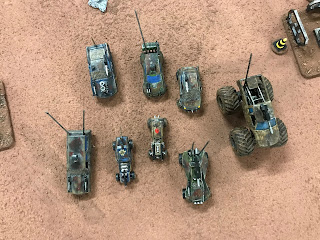 These are all the vehicles I have completed so far. I need to add a couple more cars, and I should be good to go... and paint the bikes I have... and do some billboards... and...


Well, those are my Gaslands travails till now. I am greatly looking forward to the upcoming participation game, and until then, I have a few more bits to do, and I should be done!