Sharp Practice 2 is a black powder era skirmish level war game from Too Fat Lardies. Requiring something like 40-60 odd miniatures a side, it is a game that focuses on small actions and is strong on theme. 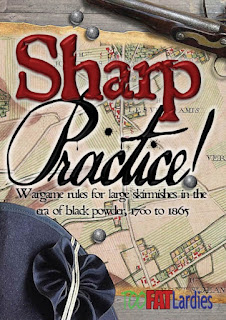 I was lucky enough, a few nights ago, to get in a first learning game, and despite having only a few blocks of infantry on the table, it was a huge amount of fun. After one game I am not familiar enough with the rules to offer any insightful commentary on what might make for strong tactical play, but what I can say is: I'm hooked. 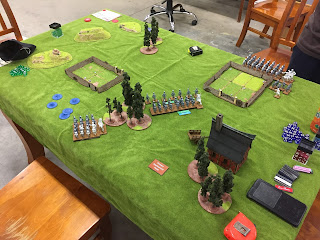 Like Dux Britanniarum, the other Too Fat Lardies game I have played (and thoroughly enjoyed), Sharp Practice manages to capture a strong flavour of the period in a relatively straight forward rules set. What is fascinating about Sharp Practice (and also present in Dux) is the emphasis the rules set places on leaders as the fundamental core to utilising your force on the table. By pulling chits (we used poker chips in a bag) or via a card deck, the leaders each player has on the table are activated. When a leader is activated they may spend their command points (called Command Initiative) to activate the groups or formations around them, to remove Shock (a form of cumulative damage a group may suffer that reflects its morale, and which is very important, as I found out) and do various other things like forming groups into formations and so on. 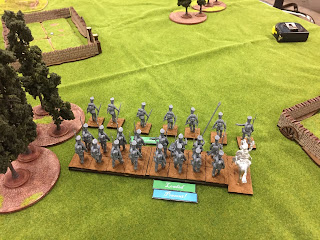 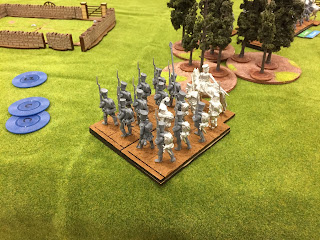 Leaders are fundamental to the operation of a player's force, and the random order in which the leaders on the table are activated (and some may not get to activate every turn), makes for a tense and exciting experience. There were many points in the game where myself and my opponent where both anxious for a specific leader chit to be drawn from the bag, hoping to get the drop on the opposing force. 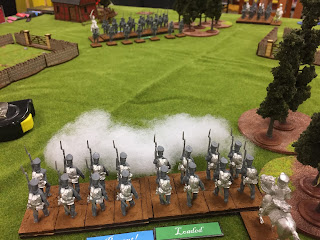 Some players may find this method of activation too random, especially as one of the cards/chits is the Tiffin, which ends the turn (even if there are leaders who have not activated). While there is truth to this, the randomness in this case manages to beautifully encapsulate the feel of the theme magnificently. As a commander you never are quite sure who will manage to make the first move, whether the soldiers are chomping at the bit to get to grips with the foe or whether they are hesitant, whether your Officers have managed to relay their orders in time... For a gamer used to the steady back and forth of I Go You Go, or Alternate Activation systems, it can take a little getting used to, but believe me, in my experience it manages to do one thing above all other activation systems... and that is feed into the story of the game. 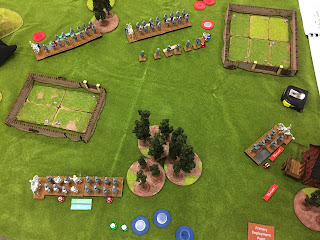 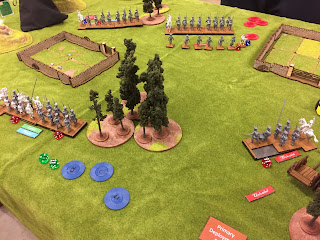 The rules set beyond command and control is solid, and while we had some questions come up through the game which we couldn't find the answers for immediately, we made a ruling and pushed on (and found a solid FAQ afterwards). Groups and Formations, when activated by a leader, have two actions such as move, reload, fire, and present (aim). With only two actions, and the requirement to reload before firing (and preferably to present as well), the system captures the theme well. The dice system follows a buckets of dice approach, which, while many gamers think this is 'lucky' actually makes resolution closer to the bell curve. I won't go into details but to note the system is solid and well devised. It manages to do what needs to be done and get out of the way in order to allow the action to happen. 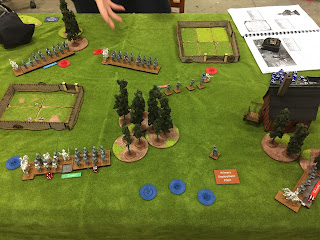 Luck, at first blush, seems to play a strong hand in the game, you dice for movement, for attacks and for other things, you draw chits (or pull cards) for activations, but the luck doesn't feel overwhelming, and the methods through which it is implemented gives it a role, but not a dominant one. At the end of the day tactical play is vital, one cannot win the game without it. To be honest, I absolutely adore the way the game runs, as frustrating as it can be to see a leader go unactivated in a turn, to have your formation loaded and presenting yet holding back their fire till too late, it is also exhilarating to take a chance and see it pay off. The simple truth of it is that the bigger the gamble you take the less likely you are to be able to see it come off; and this is as it should be. Luck is there, but it is not overriding, good and clever play, daring do, careful maneuver - these are all vital components of good play.

One thing Sharp Practice manages to do better than most other games I have ever played is to create a story. Ahh, the story. I have played few games where a narrative rises so easily from the happenings on the table as I have when playing Dux or Sharp Practice. The rules in play manage to seamlessly create a scenario in which players are doing their level best to gain the upper hand, but in which fortune and circumstance, like in every good tale, will conspire to have the successes of the erstwhile hero fluctuate. Games take on a life of their own, and the story that rises from the game play takes the players on a rollercoaster from success to failure and back again. 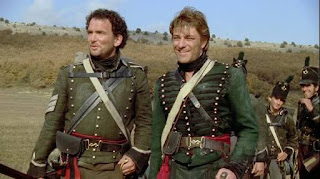 I have never played a black powder era miniatures game before, but Sharp Practice is a marvel, I am thoroughly looking forward to my force arriving, and getting them on the table more over the coming year!

Last year I had the goal of playing 100 unique games, and managed it with some 15 or so to spare. This year I am going to simply replicate that goal. Having a voice in the back of my mind telling me to try and mix up what hits the game table was enjoyable last year, and made me break out some games I hadn't played in a while, rather than going back to some old staples. This helped me rediscover what it was I enjoyed about those games, and reminded me of some of those classics on my shelves that had been collecting dust for some time. Repeating what I did last year, I will also be recording the different games I manage to get to the table via a geeklist on Boardgamegeek, in fact, you can find the geeklist here, if you're interested...

Writing for both Infinity and Star Trek leads me to the obvious conclusion that I need to play more of both! I am hoping that this year that I manage to get a regular RPG group running. Whether we play Infinity, Star Trek, Symbaroum, Wyrm, MERP, Star Wars, FATE or any one of the dozen other games I have sitting there calling for attention - I don't care! Just something! 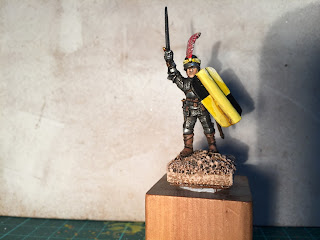 I have a host of unpainted models calling for attention, as well as a significant amount of scenery waiting to be built. My goal here is to build all the scenery I have still in wrapping, and to paint on a regular basis. I am hoping to complete my Heavy Gear army, get paint on some Infinity models, finish my Australian navy for Dystopian Wars, and much more. I think the key here is painting/building regularly more so than aiming to get specific models done. I do tend to push this aside when things get busy, but now I have a dedicated painting area... perhaps I will manage more... 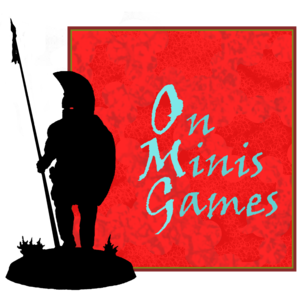 On Minis Games has been a project that a friend of mine (Quinton Sung) and I have been planning for a long time. With the last half of 2016 being as chaotic as it was, we managed to record only two episodes (which are currently available to listen to at the Inverse Genius On Minis Games page.

The aim for this year is to really get On Minis Games into gear, we've had feed issues (and if you have trouble subscribing, let me know at onminisgames@gmail.com), scheduling issues, and lots going on in our personal lives. Without the various excuses and put bluntly, we haven't done as much as we had hoped by now. We hope to remedy this in 2017! My goal is to publish at least one episode a month, and hopefully two... we shall see how we go!

If there is a particular focus, topic or concept you would like to see in a miniatures game podcast, please let us know! We are eager to more episodes recorded and available for download! 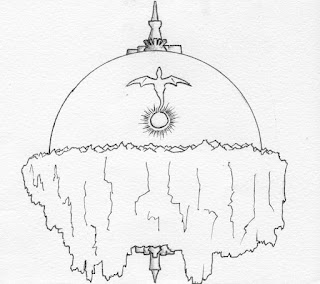 I am lucky enough at the moment to have had the opportunity to work on a range of games: Dystopian Legions, Dystopian Wars, Fleet Battles, Halo: Fleet Battles, as well as write for Firestorm Planetfall, Firestorm Armada, Infinity the RPG, Star Trek Adventures, and to work as an editor on Firestorm: Taskforce and Achtung! Cthulhu the miniatures game. I'd really like to push this a little further this year, not only by continuing to write for the various games I have an opportunity to write for, but also to design and develop some games of my own. I have a variety of RPG and board game designs in various stages of completion in boxes, folders and on my hard drive. I'd like to aim to work on at least 4 different designs of my own over the course of this year... we shall see!


Well, that about rounds off my hobby goals for this year. Doubtless I have forgotten some things, but this is enough to begin with!